On September 28, the 2020 World Culture and Tourism Forum was launched in Chanba Ecological District in Xi’an, with the theme of “Culture & Tourism Recovery with Innovation Transformation”.

The Forum was directed by the Shaanxi Provincial Culture and Tourism Department, sponsored by the Xi’an Municipal People’s Government and leading international travel services provider Trip.com Group, and organized by the Xi’an Municipal Administration of Culture and Tourism, the Xi’an Chanba Ecological District Management Committee and Trip.com Group, focused on the revitalization and transformation of culture and tourism industry in the post-pandemic era, as well as issues to do with inbound tourism, domestic in-depth tourism and smart tourism under the new normal of internationalization. The Forum seeks to make an explore in depth new opportunities, new situations and new business models for the culture and tourism industry.

Wang Hao, a member of the Standing Committee of the Shaanxi Provincial Party Committee and Secretary of Xi’an Municipal Party Committee; Cheng Fubo, Deputy Governor of Shaanxi Province; Hao Zhanyan, Deputy Director-General of the Shaanxi Provincial Culture and Tourism Department; Li Anjun, Deputy Counsel of the Foreign Affairs Office of Shaanxi; and Zhang Lin, a member of the Standing Committee of Xi’an Municipal Party Committee and Minister of the Xi’an Publicity Department attended the launch ceremony of the 2020 World Culture and Tourism Forum & “Meeting in Xi’an · Dreaming for National Games” culture and tourism promotion event. The launch ceremony was hosted by Xi’an Deputy Mayor Ma Xianping. More than 500 people were in attendance at the event, including Jane Sun, CEO of Trip.com Group and representatives from the World Tourism Cities Federation, the Shanghai Cooperation Organization Secretariat, foreign embassies and consulates in China, the World Tourism Organization, World Tourism Alliance and other international organizations, as well as leaders from domestic and international tourism enterprises, tourism marketing agencies, and the culture and tourism departments of various cities. 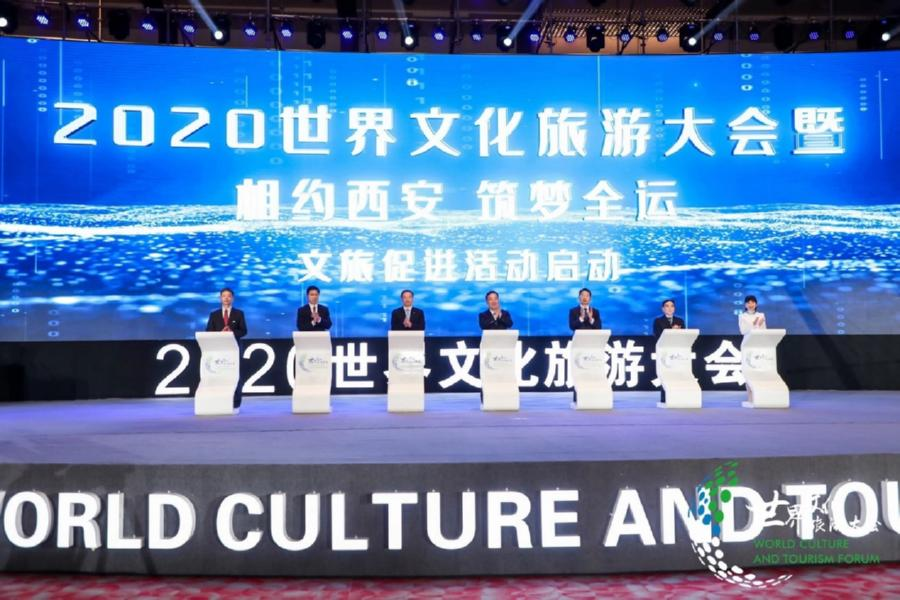 With the progression of globalization, the culture and tourism industry has become an essential engine for the promotion of global economic development and exchange between world civilization, and also an important means for countries and regions to promote their international image.

Zhang Lin, a member of the Standing Committee of Xi’an Municipal Party Committee and Minister of Xi’an Publicity Department, said that the outbreak of the COVID-19 pandemic this year has had a huge impact on the world ‘s culture and tourism industry, and Xi’an, as a well-known tourist city, faces an unprecedented challenge. The theme of the Forum is “culture and tourism revitalization · innovation and transformation”, which has special and important practical significance. Working towards the goal of building a world-class tourist destination city, Xi’an will make us of the opportunity of the 14th National Games to be held next year and join hands with cities and regions of other countries to face the new challenges of regular epidemic prevention and control, and to explore the new path for innovation and transformation of the culture and tourism industry.

“After promoting cross-provincial tourism, China’s tourism market is recovering and consumer confidence is gradually being rebuilt,” said Liu Shijun, a Counsel of the International Exchange and Cooperation Bureau of Culture and Tourism Department and Secretary-General of World Tourism Alliance. In the future, confidence and reform are the key concepts that the industry cannot afford to ignore. The Forum aims to deepen cooperation and exchanges between Xi’an and the world culture and tourism industry, as well as to promote innovation and the transformation of the domestic culture and tourism industry.

Zhu Shanzhong, Executive Director of the World Tourism Organization, and Dr. Muhammad, Chairman of the World Organisation of United Cities and Local Governments, Mayor of the city of Alhoceima, Morocco and Chairman of the Union of Moroccan Mayors, extended their best wishes to the Forum through VCR. 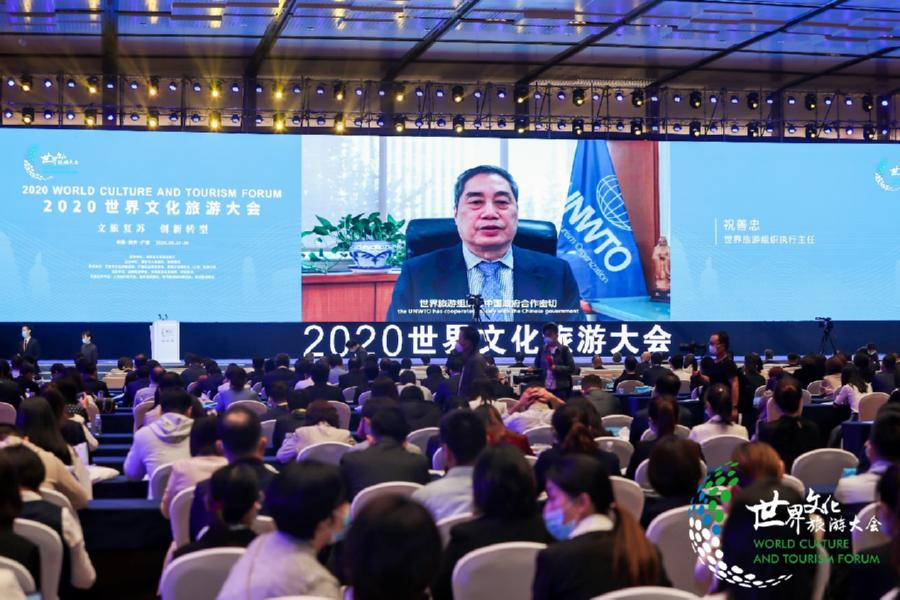 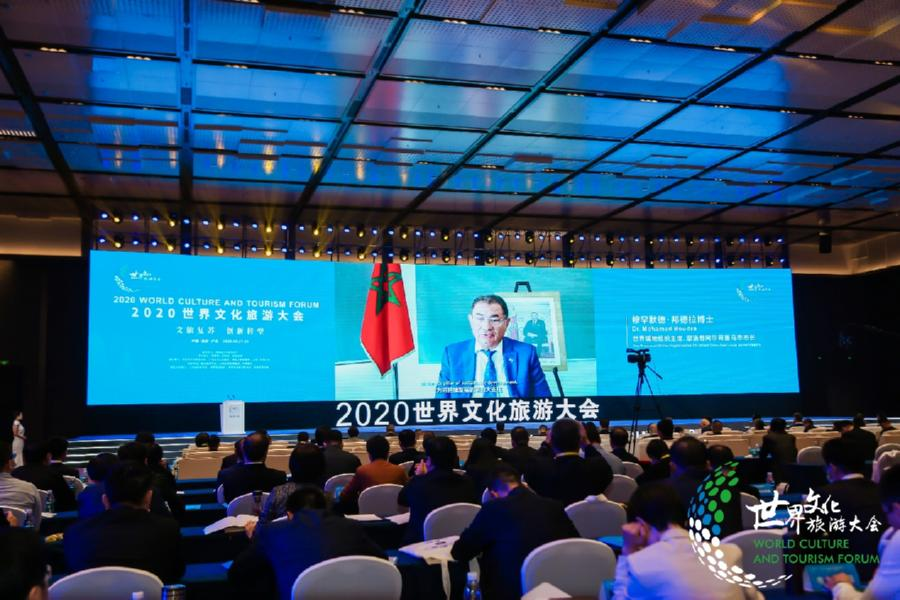 The Trip.com Group Research Institute and the Xi’an Culture and Tourism Research Center released a report on the revitalization of culture and tourism industry of Shaanxi and Xi’an. In the first half of 2020, the COVID-19 pandemic had a profound impact on the domestic tourism industry. The number of domestic tourists fell by 62% year-on-year, and domestic tourism revenue fell sharply. The recovery and revitalization of the tourism industry became the focus of culture and tourism businesses. Shanxi Province has taken advantage of opportunities to promote the recovery of domestic cross-provincial tourism. By the end of August, the number of tourists and income in Shanxi Province had recovered substantially. In regard to the general trend of tourism recovery in Shanxi Province, Xi’an contributed more than 80% of tourism revenue and more than 65% of tourist trips. According to the tourist trend map for the “National Day” Golden Week released by Trip.com Group, Xi’an is among the TOP 10 destinations for search enquiries nation-wide and among the TOP 5 in the FIT tourism list, ranking among the top ranks of popular tourist cities. An in terms of Trip.com Group’s ‘Trip Moments’ photography platform and live broadcast series, Xi’an ranks as the most popular destination, reviving the ancient capital’s popularity among Internet users.

In 2019, Xi’an made the development of the culture and tourism industry one of its ten key goals, and increased support from policies, funds, talents and other area, and as a result, the number of tourists visiting Xi’an exceeded 300 million, and the total tourism revenue reached RMB 314.6 billion. Xi’an subsequently gained popularity on online platforms, and was rated to be one of top 10 most popular cities nation-wide, ranking No. 5 according to the night visitor number index, one of top ten national summer tourist destinations, and one of the first batch of research pilot cities in the country.

With the grand launch, the 2020 World Culture and Tourism Forum & “Meeting in Xi’an · Dreaming for National Games” culture and tourism promotion campaign was officially inaugurated. 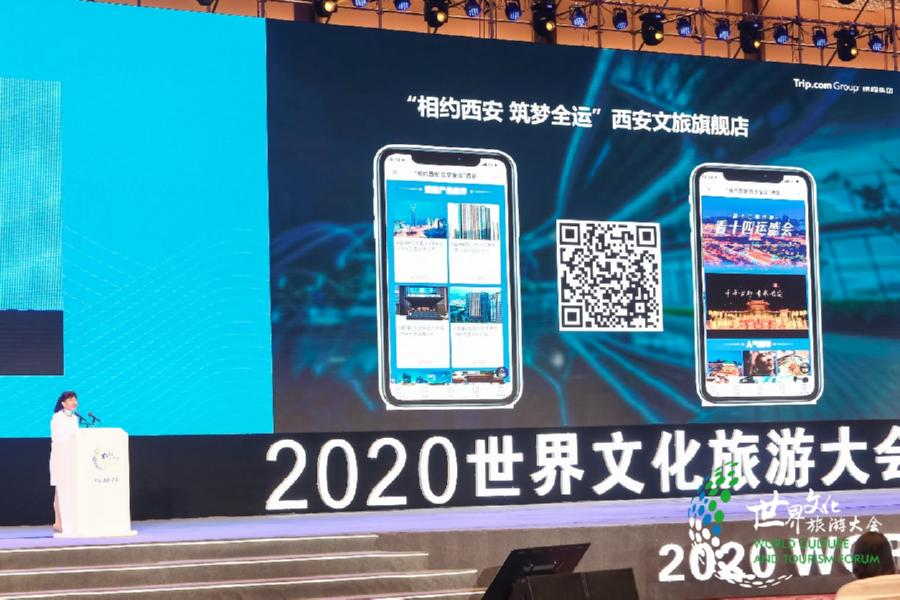 At the event, Jane Sun, CEO of Trip.com Group, introduced the “Meeting in Xi’an · Dreaming for National Games” culture and tourism promotion campaign. It is reported that in order to usher in the 14th National Games to be held in the coming year, Trip.com Group will invest promotion resources worth several hundred million RMB to jointly carry out dozens of online promotion activities with Xi’an to boost the strong recovery and innovative transformation of Xi’an’s culture and tourism industry. The flagship store of “Meeting in Xi’an · Dreaming for National Games” was launched simultaneously on the 28th, and the guests were able to enter the flagship store by scanning a QR code. Trip.com Group will help Xi’an’s culture and tourism industry to recover and transform in an innovative manner, and comprehensively enhance the international influence of Xi’an’s culture-oriented tourism sector by taking series of measures in online and offline communication.

Wu Bihu, Founding Chairman of International Tourism Studies Association and Fellow of International Academy for the Study of Tourism, delivered a keynote on the theme of “Culture and Tourism Revitalization and Development Trends in the Post-pandemic Era”. 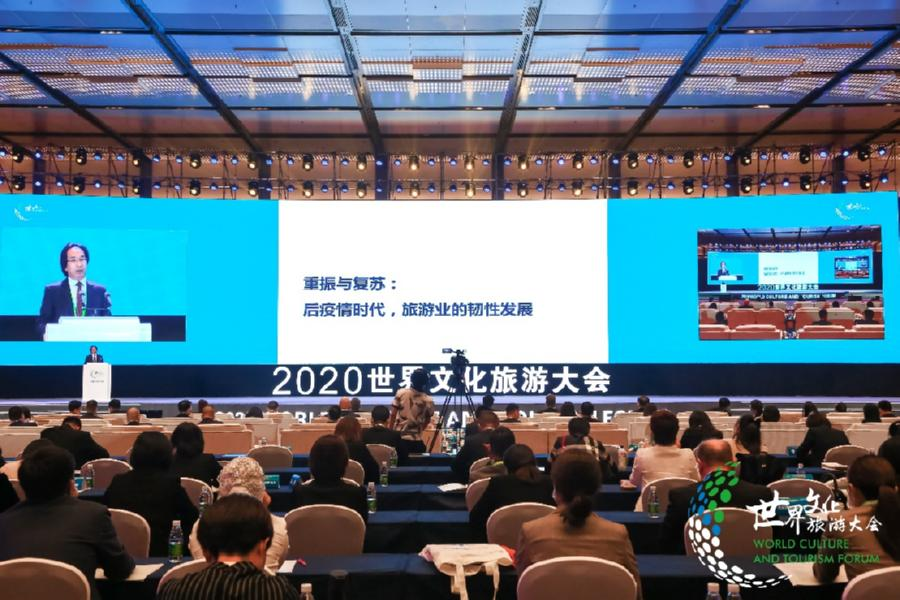 Wu Bihu said, in the post-pandemic era, opportunities and challenges will coexist, and the normalization of anti-pandemic and sustained recovery will coexist as well. The culture and tourism industry in the country has demonstrated strong resilience. Domestic culture and tourism consumption has reached a turning point, and people are more eager to visit more natural destinations and maintain ecological balance. Tourism will also become more recreational in nature.

In the post-pandemic era, where are the opportunities and directions for the global and Chinese tourism? In response to this question, Wu Bihu noted that he believes that tourism in Central Asia will see new growth under the influence of a new round of migration.

After the opening ceremony, Ma Xianping, Deputy Mayor of Xi’an City; Zhang Xuanmin, Deputy Secretary-General of the Xi’an Municipal Government; Wang Kaiwen, Deputy Secretary-General of  the Euro-Asia Economic Forum; Wang Qinghua, Director of the Xi’an Culture and Tourism Bureau; Song Rui, Director of the Tourism Research Center of the Chinese Academy of Social Sciences; Sun Bo, Chief Marketing Officer of Trip.com Group; He Shengkang, Consultant of the World Tourism Cities Federation; and leaders from the culture and tourism departments of Lanzhou and Xiamen attended a closed-door meeting to discuss the topic of “Recovery and Revitalization of the Xi’an Culture and Tourism Industry in the New Normal”, and provided insights.

Wu Bihu noted the significance of an alliance between cities initiated by Xi’an. “This alliance promotes information exchanges, cultural exchanges, people-to-people understanding and the formation and consolidation of a community with a shared future for mankind, and has drawn on history to realize a sort of reaction.”

Ma Xianping pointed out that the closed-door meeting was of great significance, both for the discussion of the revitalization of culture and tourism under the new normal, and for the opening of a window toward the world through culture and tourism. “I believe that closer ties in culture and tourism between cities which indeed be of mutual benefit to all cities involved.”